This article was written exclusively for Investing.com

Nothing fuels a bull market like incredible performance accompanied by tales of unimaginable wealth creation for early investors. In my lifetime, I had never seen an asset deliver profits like has for those who got in at the beginning and held on.

The cryptocurrency rose from five cents in 2010 to nearly $70,000 per token in 2021. The percentage gain is massive and its magnetic force has been powerful.

Bitcoin’s success gave birth to , which also delivered incredible wealth to early investors. As of Jan. 9, over 16,540 additional cryptocurrencies have come to the market in an effort to capture the clamorous demand from stampeding investors looking to discover the next token to deliver Bitcoin-like returns.

As we head into 2022, Bitcoin and Ethereum are coming off a year that increased wealth for investors who have held the tokens. Three things could push Bitcoin, Ethereum, and a host of other cryptocurrencies to even higher highs over the coming year.

However, risk is always a function of potential rewards, and the road to riches is likely to hit more than a few roadblocks in 2022 and beyond. Expect lots of volatility in the crypto asset class, and only invest capital you can afford to lose.

2021 was another bullish year for Bitcoin; Ethereum did even better

Bitcoin moved 57.81% higher in 2021, while Ethereum surged +391.75%. On Nov. 10, both leading cryptocurrencies moved to new all-time highs when they put in bearish key reversal patterns on the daily chart and corrected.

Volatility is nothing new for the cryptos. They have routinely experienced head-spinning moves on the up and downside. 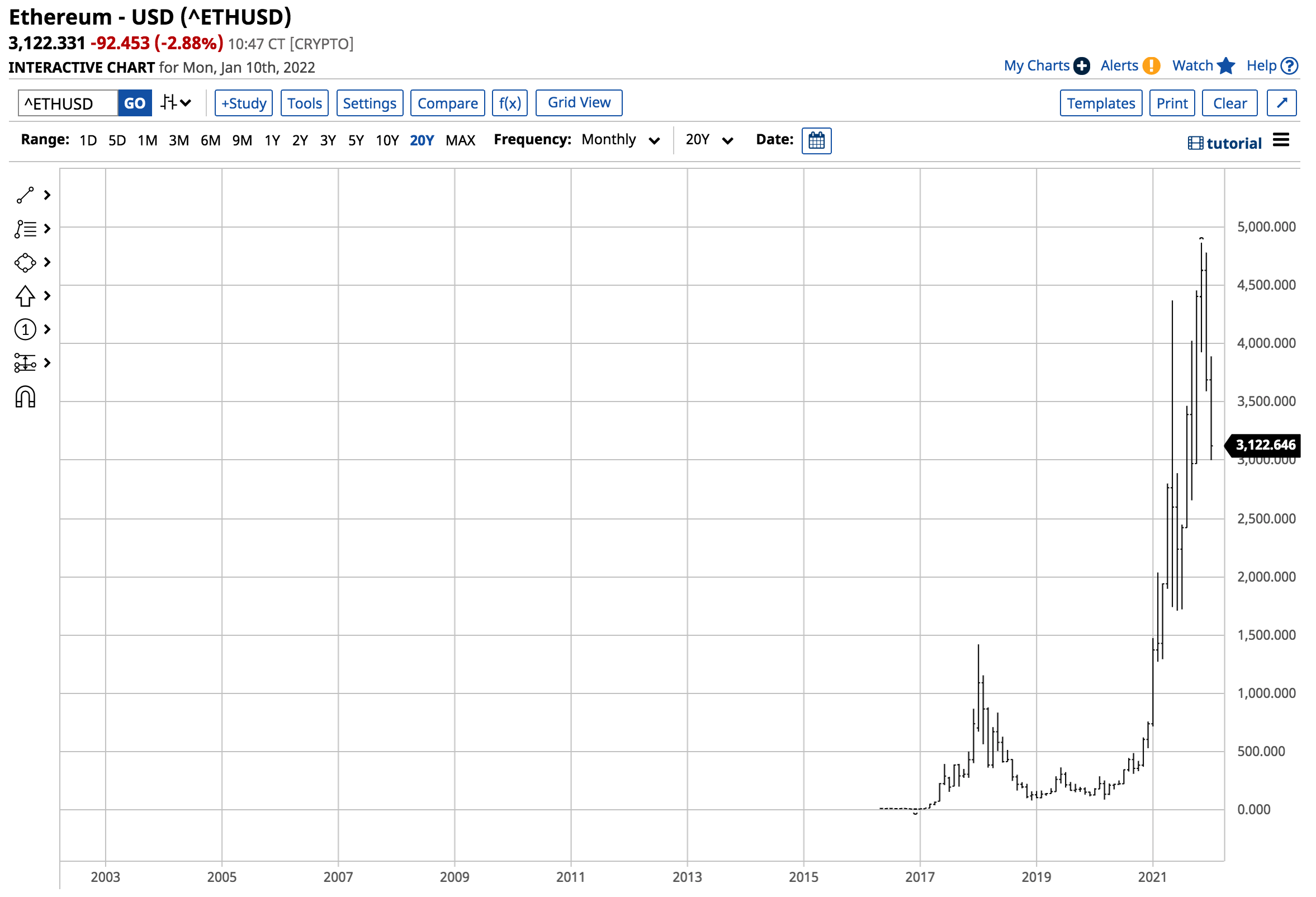 But on Jan. 9, 2022, since the Nov. 10 highs, the trend has been bearish, and the selling continues in early 2022 with Bitcoin and Ethereum falling to prices below where the digital currencies finished at the end of 2021.

Bitcoin and Ethereum were already trending lower when the Fed released its December on Jan. 5. As inflation barometers, the cryptos declined to new lows in the wake of the minutes that pointed to a more hawkish approach to monetary policy over the coming months.

Meanwhile, three factors suggest that Bitcoin, Ethereum, and other cryptos will find bottoms and resume their ascent in 2022.

While the Fed is talking tough, action speaks louder than words. In December, the FOMC forecast that the Fed Funds rate would rise to 0.90% in 2022 and 1.60% in 2023. Even if inflation recedes, real rates will remain in negative territory in 2022, which is inflationary.

If the cryptos are inflation barometers, they are likely to move to the upside and attract new buying in an environment where remains a clear and present danger and is rising. Inflation erodes fiat currencies’ purchasing power. Cryptos are an alternative as values are determined by buyers and sellers, with no government interference.

Trust is critical for currency values. While the has been moving higher, it only reflects the US currency’s value against the euro, yen, pound, and a handful of fiat reserve currencies. Measuring currencies against markets across all asset classes reveals that trust has eroded along with fiat currency values.

More businesses are accepting cryptocurrencies as a means of exchange each day. Cryptos reflect the evolution of the fintech revolution, where technology has finally addressed payments and finance. As the faith in governments and traditional banking institutions declines, cryptos offer an alternative for consumers.

Square, a payments company that changed its name to Block (NYSE:) in late 2021 is headed by Jack Dorsey, who also founded the company as well as another business, Twitter (NYSE:). He left Twitter last year in order to concentrate on cryptocurrency initiatives in 2022.

In 2021, Mr. Dorsey once said that Bitcoin and cryptos will “unite the world.”

The leading risk is government regulation. As the asset class grows, we will hear a lot about “systemic risks” created by cryptocurrencies. However, the primary concern for governments is likely to be controlling the money supply, which translates to power.

With Apple’s (NASDAQ:) market cap rising above the $3 trillion level for the first time in early 2022, the $1.956 trillion cryptocurrency market cap on Jan. 9 is not yet an issue that would create any significant “systemic risks.”

Still, the market cap for the digital currency asset class grew by 182.18% in 2021 to the $2.166 trillion level. A similar move in 2022 would put the value of the entire asset class at nearly $4 trillion, which would set off alarm bells with regulators and government officials.

Ethereum should continue to lead Bitcoin as it is faster, more efficient, and Ethereum 2.0 is less energy intensive in a world addressing climate change. It operates under a proof of stake instead of a proof of work protocol which adds to its efficiency versus its larger cap ‘cousin.”

Nevertheless, I expect Bitcoin and Ethereum to establish higher lows over the coming weeks and months before resuming the ascent that has created untold wealth for a growing number of believers in the burgeoning crypto asset class.