Markets have been in disarray. Altcoins have experienced catastrophic losses. This comes at a time when most cryptocurrencies were already down a significant amount from all-time highs. Heck, Terra (LUNA -99.09%) somehow managed to lose at least 50% of its value in just one day.

It seems as if nothing is safe from these corrections — not even stablecoins are stable in this market. And it is totally possible that prices will decline further. Chasing an altcoin that skyrockets more than 2,000% in a year is definitely attractive. But it isn’t sustainable.

After the astronomical run that some altcoins went on, it is difficult to remember that there is one tried and true strategy when it comes to investing in cryptocurrency. It isn’t as glamorous as a shiny new altcoin, but it works.

People seem to have forgotten that Bitcoin (BTC -2.60%) is king.

The oldest and biggest cryptocurrency, Bitcoin, is down more than 20% since the start of May. Those that have been around long enough to remember other meltdowns of more than 50% in less than a month can attest that this is just another bump in the road.

Sometimes knowing where Bitcoin has been is enough to have confidence in where it will go. In April 2013 Bitcoin lost 83% of its value. In December of that year it shed another 50% when China “banned” Bitcoin. The year 2018 was dismal. Despite hitting an all-time high of nearly $20,000 in December 2017, by December 2018 it was only trading for just over $3,000. More recent investors likely remember the flash crash of March 2020 when Bitcoin lost 50% in just a couple of days. The same thing happened in May 2021. 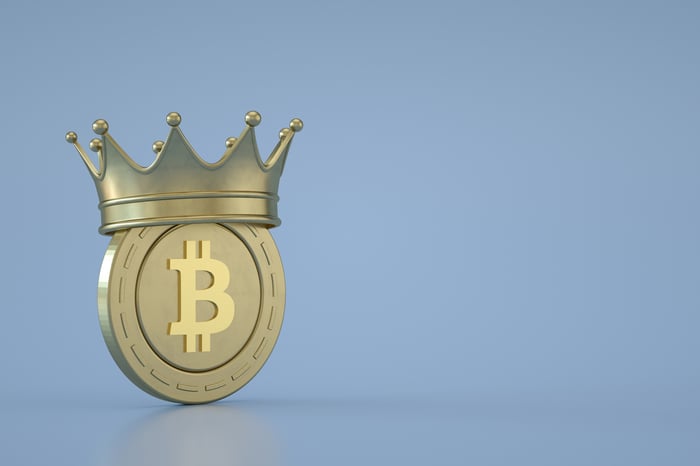 And yet despite all of this, Bitcoin remains at the top of the cryptocurrency market. It has rebounded every single time. Bitcoin has been there, done that.

This isn’t to say that Bitcoin won’t fall even further. That is entirely possible. But investors should sleep better at night knowing that Bitcoin has tested these waters before. Unlike previous times, Bitcoin’s utility and adoption are at levels never seen before.

Two countries have adopted Bitcoin as official currencies. The Securities and Exchange Commission has approved a Bitcoin Futures ETF. Fidelity, the largest 401(k) provider, now offers clients Bitcoin. If one didn’t look at the price, times couldn’t be better for the king of cryptocurrencies.

When Bitcoin hit what was an all-time high of $30,000 in January 2021, investors were elated. Now Bitcoin is worth a bit less than $30,000 and some people claim Bitcoin is dead.

In times like these, altcoins will suffer losses orders of magnitude larger than Bitcoin. Although some of these altcoins have risen faster than Bitcoin, they will not remain there long.

Don’t lose sight of the forest for the trees. Retracements of these kinds can last a year. Or they can last a few months. But in the end, slowly but surely, Bitcoin will return. Ignore the hysteria and take this time to gain exposure to Bitcoin at levels we will be wishing we had years down the road.